Brad Brown is a magical entertainer. Based out of Northern Kentucky, he travels from coast to coast and around the world delighting audiences with his unique blend of comedy and magic.

He got his start in magic as a child, when he found a box of magic apparatus in his grandmother’s attic. “Like many kids, I went through a phase where I liked magic,” says Brad, “but I just never outgrew it.” Brad continued to hone his skills in performing and ministry through his college years.

Now Brad works in partnership with organizations across the nation to provide entertainment and inspiration. With Brad’s mind-blowing magic and side-splitting comedy, your group will be engaged, laughing, and actively involved in making the magic happen.

Bring magical fun and excitement to your next event.

Brad understands that his job is not to fool people, but to entertain them.

He combines his astounding magic with his dry humor to create a uniquely amazing entertainment experience.

His programs can include everything from escapes, to comedy magic, to sleight of hand. 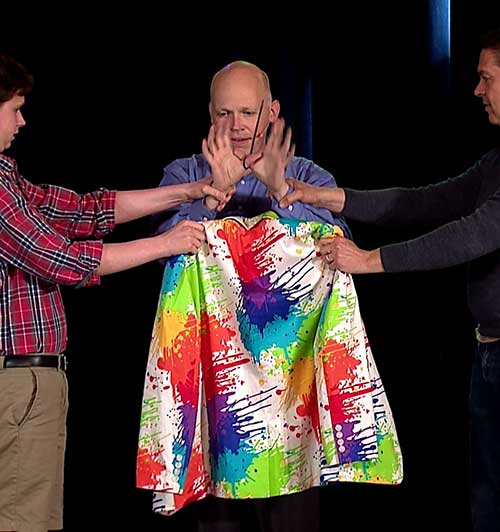 Brad’s one-man stage show is the perfect program for major events. It has the audience laughing and actively participating in making the magic happen. It can include effects like producing a real bowling ball from nowhere, attempting Houdini’s challenge 50-foot rope escape, and cutting off an audience member’s head.

Although the program works well on stage, it doesn’t require a “real” stage. It can be adapted for banquet halls and similar settings. The stage show typically lasts 45 to 75 minutes, depending on what’s appropriate for the event.

Take Their Word for it

Brad did a great job. I do know that next time we have him we will give him a lot more time. We had others on the program so had to keep all of them short. We would definitely have him back. It was even better than I expected, and I have to say I was expecting it to be good.

Thank you so much for all of your expertise at our last two [American Cancer Society] Relays. I heard quite a few great comments on your show. Maybe next year we can swing a bigger stage!

From the start, Brad was easy to work with and his needs were clearly laid out. Brad was very timely the day of the event and had everything set up with plenty of time to spare. We have had several magicians over the years but Brad was by far the best we’ve had.

We will never hesitate to recommend you to others and we look forward to having you back again.

I think any group that would bring Brad to their function would be just delighted and would really have a good time.

Talk to us to get more information or to schedule an event. Your group will thank you!